Making The Most Of Your Travel Hours

Traveling can be an enjoyable experience but it can also be a challenge especially for those who travel frequently on business. Business travel is not the same as traveling for pleasure simply because there is a lot more pressure on a business traveler than on a vacationing one. There are many reasons why individuals look to simplify their travel when they are doing so for business and one of the primary reasons is the fact that they would love for their time spent in the air to be productive. After all, if they need to be sedintary for a period of time they would like for that time to be productive and useful in preparation for the business meetings and presentations that lie ahead at their destination. 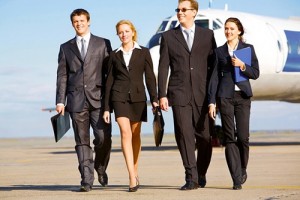 For a long time, on this note, many companies used to have their own fleet of private jets on hand, company owned and operated they had these fleets ready and waiting to fly anyone and everyone to destinations on a moments notice. Of course, this did come at a hefty price, not just because of the cost of actually paying for the upkeep of the aircraft themselves, but also because of the cost of keeping different individuals on standby waiting to fly someone to their destination. In many of the larger companies, issues also stemmed from the knowledge of the public seeing this type of major expenditure out there in the open and let’s face it for most it was quite flagrant for major corporations filing for bankruptcy to come out for meetings in company owned private jets.

While many companies can’t afford not to transport their employees in this matter due to the simplicity that is involved in this type of travel and of course, the ability of their employees to take in business meetings, to get some rest, to work, or at the very least to simply reduce their travel time to a more managable amount they don’t want to seem flagrant in their expenditures at least in the public eye. This is perhaps why more companies have opted to sell off their fleets and just use private charter flights instead.
Using a private jet charter company has proven more affordable to those companies that don’t have as much travel to international destinations and even in the rare case that a specific company is spending more on private charter flights each year than they were paying having their own fleet, there are less headaches involved in placing the burden of safe and timely transport on someone other than your company itself. And it also has helped major corporations save face with the public in a time of economic crisis.

Tweet
This entry was posted in Private Jets. Bookmark the permalink.