Jaguar: Back in the Sports Car Game With the New F-Type Roadster

Last month the Paris Motor Show was the launch pad for Jaguar’s first sports car in over 50 years.  The new F-Type roadster was revealed after more than a decade of waiting while Jaguar teased with the idea of bringing back the two seater.  The first concept car was shown at the Detroit Auto Show in 2000 with a tentative 2004 release date which never materialized.  Then in 2011, they showed the striking C-X16 at Frankfurt, signaling finally that they were ready to play in the sports car arena again. 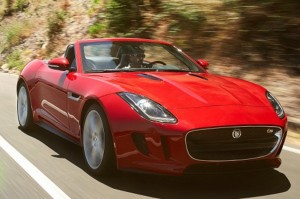 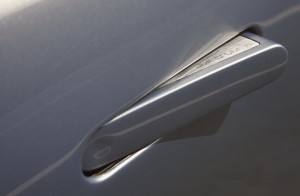 The design of the roadster’s cabin is reminiscent of an airplane cockpit with all controls ergonomically placed around the driver.  The center console features a passenger side grab handle, further delineating the rest of the cabin from the driver – and possibly offering a hint that the car is fast and it might make sense to hang on.  Nifty pop up air vents embedded in the surface of the dashboard only deploy when manually activated or automatically by pre-determined temperature control settings.   Outside the vehicle, even the door handles recede into the body of the car when not in use, in a further gesture to optimum aerodynamic styling. 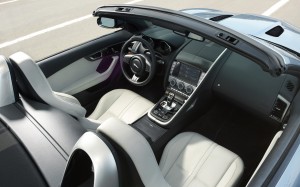 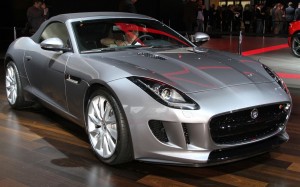 Jaguar is one of the original members of the sports car segment, and with the release of the F-Type, they are clearly excited to re-enter the game after a 50 year absence.  The two seater F-Type roadster is constructed of an aluminum body, building on Jaguar’s history of innovation with aluminum structures.  Offering a lighter weight and better handling with the stunning new aerodynamic design, the aluminum construction represents over 10 years of experience working toward the goal of a rigid body with a low mass.

They haven’t overlooked a single opportunity to keep the weight down while maintaining a low center of gravity.  Even the soft top is constructed with a new Thinsulate® lining which provides superior temperature and sound insulation.  The unique lightweight top can be raised or lowered in 12 seconds at speeds of up to 30 mph, and when it is lowered, it acts as its own Tonneau cover, meaning less weight and better agility and handling.

Jaguar’s commitment to sustainability is clearly present in the new F-Type, as the content of the car contains more than 50% of recycled or reclaimed metal.  As a further investment in the reusability notion, Jaguar employs a waste recycling system in which all waste metal from the manufacturing process is reused. The F-Type also uses more composites than any Jaguar in the past, with the trunk lid and sill components being constructed of high strength polymers.

After a 50 year absence, re-entering a market segment  they formerly owned presents an exciting time for Jaguar. We can’t wait to see the new F-Type on the road.  Configure your own F-Type at the Jaguar website.  Mine will be Salsa Red.