Finally a Permanent Berth for the Beloved QE2

Even though the Queen Elizabeth 2 took its last voyage in 2008, it was actually purchased in 2007 by Dubai for $100 million, guaranteeing it wouldn’t be dismantled and sold for scrap.   The legacy would continue, to the relief of fans the world over.  The original intent of Dubai was to gut it and redo it into a high end floating hotel but that plan fizzled as not economically viable, and in the meantime the QE2 has been patiently awaiting her fate, moored at Port Rashid in Dubai, while being used as a popular rental venue for social events and fundraisers.

Sultan Ahmed bin Sulayem, chairman of Istithmar, the state owned company in charge the project, says it has been during this time that he realized just how much people loved the ship for its historical value.  With that in mind, a new 18 month master plan has been conceived which will develop Port Rashid into a maritime attraction with a museum, retail and expanded berthing for cruise ships visiting Dubai.  And the QE2 will remain at the port as its primary drawing card, with 300 rooms converted to luxury hotel rooms while maintaining the character and personality of the ship’s existing public areas.

Since its maiden voyage in 1969, there has been a certain prestige associated with the QE2 not afforded any other contemporary ship.  Always a symbol of ultimate luxury, the QE2 has hosted the rich and famous more than any other boat.  And she’s set quite a few records in her day as well:

Private Jets Charter has an office in Dubai where our local concierge team is eager to assist with your ground arrangements. 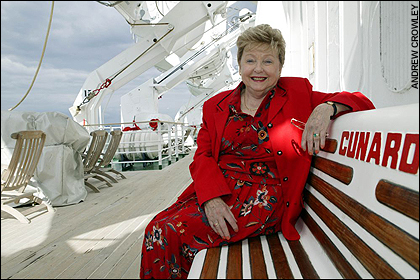 Beatrice Muller at Home on the QE2